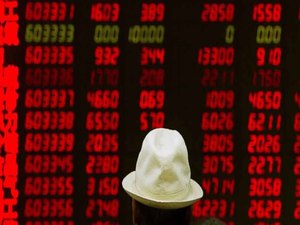 Asian stocks rose Wednesday after a cautious day as investors weighed fresh signs the world economy is in recovery against fears of a second virus wave, geopolitical tensions and profit-taking.

Federal Reserve and Bank of Japan pledges of more support troubled businesses, and reports of a new trillion-dollar US stimulus sent regional markets soaring Tuesday as they helped traders look past a worrying increase in infections from Tokyo to Beijing to Texas.

Optimism about the world's top economy was given an extra boost by data showing retail sales, crucial to any recovery, soared a forecast-busting 17.7 percent in May. That came after figures showed a surprise jump in jobs last month.

Meanwhile, an Oxford University study showed the steroid dexamethasone could cut the risk of death for people on ventilators by almost a third.

Still, Fed chief Jerome Powell, whose sobering summary of the outlook for the economy last week sparked a plunge across equities, warned in congressional testimony Tuesday that the recovery would take some time.

While some recent indicators have been favourable, he told lawmakers there was "significant uncertainty" about the outlook and unless consumers feel confident COVID-19 has been defeated, "a full recovery is unlikely".

He added that the April-June quarter "is likely to be the most severe on record".

After an edgy start to the day, Asian markets extended Tuesday's big run-up.

Sydney climbed 0.8 percent, Mumbai edged up 0.5 percent and Taipei put on 0.2 percent, while Wellington soared more than three percent as the New Zealand government moved to tighten borders with military personnel following the import of two virus cases this week.

Tokyo lost 0.6 percent a day after a near-five percent surge and following a report showing Japan's exports and imports each fell more than a quarter last month.

But there was also a warning of a market pull-back after a massive surge in valuations from their March troughs, fed by government and central bank support as well as the easing of lockdowns.

"There is so much uncertainty right now and it looks to us like the market has really gotten ahead of itself, and that concerns us," Sandi Bragar, at Aspiriant LLC, told Bloomberg TV.

"We are in the early stages of this and we are concerned the recovery is going to be long and slow."

The major threat to any rebound is a renewed surge of infections, which could slow the easing of restrictions and reopening of economies.

Eyes are firmly on Beijing, which on Wednesday cancelled more than 1,200 scheduled flights from the city's airports, having already urged residents not to leave the city and closed schools again as authorities scramble to contain a "severe" new outbreak in the city of 21 million people. More than 100 people have been infected so far.

The coronavirus resurgence -- believed to have started in the capital's sprawling Xinfadi wholesale food market -- has prompted alarm as China had largely brought its outbreak under control through mass testing and tough lockdowns.

Spikes in Tokyo, which recently lifted a state of emergency, and populous Florida and Texas have added to the concerns.

Investors are also tracking developments on the Korean peninsula after the North blew up an inter-Korean liaison office on its side of the border Tuesday, following days of virulent rhetoric from Pyongyang.

On Wednesday, Pyongyang threatened to bolster its military presence in and around the Demilitarized Zone and rejected an offer from President Moon Jae-in to send envoys for talks.

At least 20 Indian soldiers were also killed in a "face-off" with Chinese troops on a disputed border Tuesday, the first deadly encounter between the nuclear-armed nations in almost half a century.