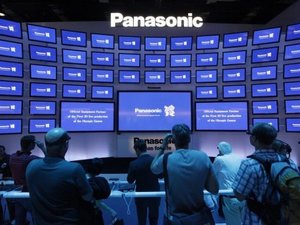 Moody's on Friday downgraded Japanese electronics titans Sony and Panasonic, warning both companies faced a long struggle if they were to get back on a firm financial footing.

The agency lowered its assessment on debt issued by Sony from A3 to Baa1, citing "weak and volatile" earnings, while Panasonic slipped a notch from A1 to A2, on fears "the weakness in Panasonic's profile will continue".

Sony has long been mired in the red, with its television business losing money. It has been hit by a strong yen, hacker attacks on its PlayStation Network, and both Japan's earthquake-tsunami disaster and floods in Thailand last year.

Moody's said around $5 billion worth of long-term debt issued by Sony was affected by its announcement, which it said was due in large part to Sony's "loss-making TV business, which is grappling with severe competition, sharp price declines, and a strong yen".

The division has been badly hit by rampant competition and minuscule margins, making profits difficult to squeeze out with consumers increasingly unwilling to shell out the sky-high prices for televisions that they once did.

Moody's said the move would give Sony more flexibility to buy LCD components on the open market.

"However, Moody's believes that it will still be challenging for the company to make a profit in the TV segment in the next two years," the statement said.

Moody's said the outlook for Sony was negative and it was unlikely to upgrade the company in the short term.

Regarding Panasonic, Moody's said around 900 billion yen of bonds would be affected by that firm's downgrade.

"Panasonic's net debt rose to about 550 billion yen... from about 100 billion yen in the prior year, while its adjusted-debt-to-capitalization increased to about 45 percent from about 35 percent.

"In Moody's opinion, Panasonic is unlikely to restore its financial profile in a timely manner. Among the most prominent reasons are continued losses in its TV business and declines in earnings from its semiconductor business."

The ratings agency said Panasonic was eyeing consolidated operating profit of 130 billion yen this year, down 175 billion on the year before, with an operating margin of just 1.6 percent, against 3.5 percent previously.

"A portion of this decline is due to non-recurring events -- specifically, the March 11 earthquake in Japan -- but a significant portion is also recurring.

"Moody's believes that Panasonic's operating profit... will be under further pressure, given weak market conditions and supply chain disruptions after the floods in Thailand."

Moody's said the outlook for the company was negative and an upgrade in the short term was unlikely.

Before the announcements Sony shares had closed up 3.09 percent at 1,367 yen on the Tokyo stock exchange while Panasonic had finished 3.98 percent higher at 653 yen, as eurozone debt fears receded and on positive U.S. economic data.