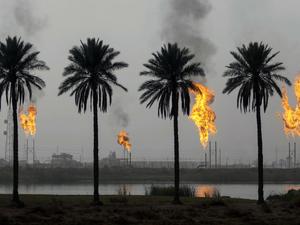 Crisis-wracked Venezuela's relentless fall in oil production sunk to a new low in May, according to OPEC figures, a milestone in a decade of decline for the once proud petroleum powerhouse.

Venezuela -- heavily dependant on income from oil exports -- produced just 570,000 barrels of oil a day, a drop of 54,000 bpd compared to one month earlier in April, according to Organization of the Petroleum Exporting Countries figures out Wednesday.

Venezuela's oil production peaked in 1970 at 3.7 million bpd, and even 12 years ago state oil company PDVSA -- once among the world's top five oil enterprises -- was producing 3.2 million bpd.

Not counting a December 2002-March 2003 oil workers strike, the current output is the lowest since 1943, when Venezuela had a population of barely four million, compared to 30 million today.

Experts blame the production drop on government mismanagement, corruption and a failure over many years to invest in infrastructure upgrades and maintenance.

These problems have been amplified by US sanctions aimed at starving President Nicolas Maduro's regime of a major source of funds in a bid to force him from power.

Between 2004 and 2015, Venezuelan oil exports raked in $750 billion, and the country had more than $42 billion in international reserves -- now down to just $6.4 billion, according to the Central Bank.

Venezuela's economy has been devastated by six years of recession, and it is experiencing the world's highest inflation rate -- all before the COVID-19 pandemic even struck.

On April 24, Venezuelan crude prices plunged to $9.90 a barrel -- its lowest in two decades, although it rebounded to $13.45 by May 1. The oil ministry has not published any figures since.

According to oil information firm S&P Global Platts, Venezuela was forced to scale back production in recent weeks due to storage limitations and a lack of light oil to process its heavy crude.

Yet even if Venezuela were pumping at capacity, oil prices are at their lowest in years due to a huge drop in global demand, a result of worldwide economic crisis unleashed by the COVID-19 pandemic.

Up to 2018, Venezuela was sending 500,000 bpd to the United States alone, and received in return 120,000 bpd of light oil, diluents and fuel-producing supplies.

Sanctions, however, have forced Venezuela, which used to refine enough oil for its own needs, to turn to allies such as US nemesis Iran to alleviate a desperate gasoline shortage.

All this is "sharpening Venezuela's cycle of recession," said economist Jose Manuel Puente, from the Public Policy Center at the Institute of Higher Education Administration (IESA).

Venezuela is heading for a seventh straight year of recession, during which time its economic growth has halved.

Making matters worse, Venezuela is selling the little oil it exports "at a loss" due to the global price drop and the dealings it must operate to work around US sanctions, said Puente.

The country "is on the brink of collapse," he said.

Central Bank advisor Carlos Mendoza Potella is critical of the government's policies, but says US sanctions played a major role in the oil industry's demise.

"They're strangling us, we've got (President Donald) Trump's knee on our neck," said Mendoza Potella.

Even without sanctions, though, he doesn't see a future with oil as a "driver of development" due to the high costs in extracting Venezuelan crude.

Venezuela has the world's largest proven crude reserves, but "that serves no purpose" if you can't extract and sell it at a profit.

"Alone we can't do it. We don't have the technology, or the financial and human resources," he said.

The latest drop in production coincides with a flare-up of tensions between Maduro and opposition leader Juan Guaido, who declared himself acting president 18 months ago, earning recognition from more than 50 countries.

Although the two agreed to cooperate to help fight the novel coronavirus, they have since clashed over upcoming legislative elections, which the opposition plans to boycott.

Puente says there is no chance of an economic bailout without a political transition plan that would likely require Maduro to cede power.

"We have no alternative, either we do it or we'll continue un the cycle of disaster," he said.