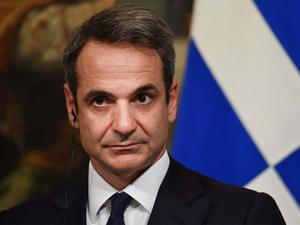 The EU must not look "weak" in enforcing a UN arms embargo on Libya, the Greek government said Friday after recent naval incidents involving Turkey.

The embargo was agreed amid efforts to stem the conflict which has racked Libya since the 2011 overthrow of dictator Moamer Kadhafi, but Western efforts to enforce it have met limited success.

He made the remarks at Wednesday's European People's Party teleconference and they were quoted by government spokesman Stelios Petsas on Friday.

The Greek call came after NATO launched an official investigation into a naval incident in the Mediterranean between alliance members France and Turkey that has infuriated Paris.

France said one of its ships was subjected to radar targeting by Turkish frigates as it sought to inspect a Tanzanian-flagged cargo vessel suspected of carrying arms to Libya.

A Greek navy vessel was last week also prevented from inspecting the same freighter by its Turkish military escort.

President Recep Tayyip Erdogan has caused repeated unease at NATO with Turkey's interventions on Syria and Libya and the contentious purchase from Moscow of Russian S-400 anti-aircraft missiles.

But Turkey's strategic position between Europe and the Middle East, commanding the southern shores of the Black Sea, make it an important ally.

After months of diplomatic wrangling the European Union set up its own maritime mission, Operation Irini, to try to halt the flow of arms to Libya.

But Irini has struggled for resources and this week EU foreign policy chief Josep Borrell was forced to make a fresh appeal to member states for ships.