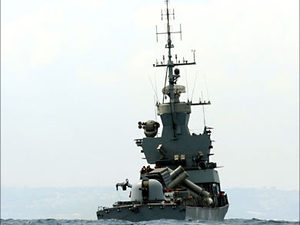 The movement of U.S. warships in the Mediterranean sea has been disrupting Lebanon’s internet services in the past three weeks, An Nahar daily reported Saturday.

The newspaper said that the problems which began when former Premier Saad Hariri’s government collapsed are not the result of operations conducted by UNIFIL’s naval force.

The problems have affected big companies and banks from the southern city of Sidon all the way to the Lebanese-Syrian border in the north, An Nahar said.

However, it said it received information that U.S. warships that are currently in Mediterranean waters are affecting the internet services in Lebanon.

Engineer Antoine Bustani, a telecom expert, confirmed to Voice of Lebanon radio station that radars of warships disrupt internet and other telecommunications services.

The telecommunications ministry has launched efforts to solve the issue, he said. The plan will be implemented in several stages, Bustani added.