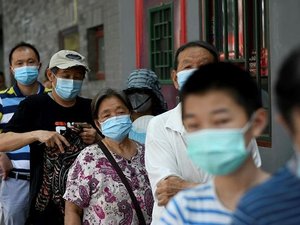 China banned imports from a top U.S. poultry producer and ordered a Beijing Pepsi factory to close Sunday as authorities clamped down on food production and distribution amid a new coronavirus cluster in the capital.

Health officials also reported 22 new virus cases in Beijing, where they have tested more than two million residents as they seek to contain a wave of new infections linked to a wholesale market in the capital.

Imports of frozen chicken from Tyson Foods have been "temporarily suspended", the General Administration of Customs said, after a virus outbreak was found at one of the company's production facilities in the U.S.

Products from the firm that have already arrived in China will be confiscated, the statement said.

US food and drinks giant PepsiCo was also ordered to shut down one of its snack-making plants in Beijing after several employees tested positive, company spokeswoman Fan Zhimin said.

She added that 87 close contacts had been traced and quarantined.

More than 220 people have so far tested positive from the new Beijing clusters that have been traced to chopping boards used to handle imported salmon at the city's Xinfadi market.

The market supplies more than 70 percent of Beijing's fresh produce and has been closed, with officials on Friday advising citizens to dispose of frozen seafood and bean products bought there.

Officials on Friday also announced a nationwide campaign to inspect all fresh products coming from "high-risk countries" following reports of new virus clusters at plants in Germany and the US.

Authorities are targeting those who work in restaurants, supermarkets, markets and food delivery couriers for testing, according to Gao Xiaojun of the Beijing Municipal Helth Commission.

Dozens of communities have also been sealed off in the city to contain the spread, with residents told to avoid non-essential travel and schools closed.

Authorities are conducting tests in batches, according to Gao, allowing them to process up to one million per day.

The new infections reported Sunday include a nurse -- the first health worker to test positive since the re-emergence of the virus just over a week ago.

The chief epidemiologist at the Chinese Center for Disease Control and Prevention told reporters Friday that the new outbreak had been "brought under control", but Beijing would still see new cases.

The outbreak has also spread to Tongzhou, the administrative hub in Beijing where key government offices are located, health officials said Sunday.

Infections brought in by Chinese nationals returning home had accounted for the majority of recent cases until the Beijing cluster.