Djokovic Positive for Coronavirus, Questions over Return of Tennis 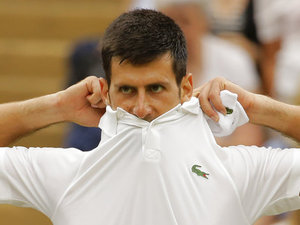 World number one Novak Djokovic's hopes of hosting a successful exhibition tournament during a pandemic spectacularly backfired Tuesday when he became the fourth player to test positive for coronavirus, raising serious questions about the sport's planned return in August.

Djokovic, who was not showing any symptoms, joined fellow players Grigor Dimitrov, Borna Coric and Viktor Troicki in testing positive for COVID-19 during the second leg of his Adria Tournament where social distancing was minimal.

Djokovic said his wife Jelena also tested positive while the results of their children were negative.

"I am extremely sorry for each individual case of infection," said the 33-year-old Serb, who has said he would be against a compulsory coronavirus vaccination if it became a requirement for tennis players to travel to tournaments.

"I hope that it will not complicate anyone's health situation and that everyone will be fine," the 17-time Grand Slam winner said, adding that he would now go into self-isolation for the next 14 days.

Bulgaria's Dimitrov, the world number 19, announced on Sunday he had tested positive after pulling out of the event, the biggest since the tennis season was halted because of the pandemic that has killed at least 472,173 people worldwide since it surfaced in China late last year.

The final in the Croatian coastal town of Zadar was cancelled Sunday while the final stop of the ill-advised Adria Tour, in Bosnia in early July, was also scrapped after the news of Djokovic's infection.

"Unfortunately, due to all events in the past days we decided that now the most important thing is that the epidemiological situation is stabilized and everyone recovers," tournament director Djordje Djokovic, the player's younger brother, said in a statement.

"Now we remain focused on the support to all those infected... wishing that they recover as soon a possible."

The outbreak raises the question on how the ATP and WTA can best manage the restart of their tours scheduled for August.

It has already been established that the US Open in New York will be played behind closed doors and under strict health protocols which Djokovic, to much criticism, described as "extreme" and "impossible".

"Yikes... this is not good and it's a pattern..." tweeted female tennis legend Martina Navratilova after news of Djokovic's positive test.

"Hope Novak will be ok of course! What now, US Open? Roland Garros? We have a lot of work to do..."

The ATP, while wishing those infected a swift recovery, said Tuesday that it and other stakeholders had "made exhaustive plans to mitigate risks through a variety of precautions and protocols to be implemented at ATP events".

"We continue to plan and adjust these precautions and protocols according to latest medical information and prioritize safety in assessing every decision."

The cancellation of the Serb's Adria Tour has come on the back of a number of gaffes for Djokovic, who is the president of the ATP Player Council.

First criticized for breaking lockdown rules to train in Spain, he then invited derision for insisting emotions can change the quality of water while almost simultaneously insisting that he would not be prepared to vaccinate against coronavirus.

The Adria Tour's first stop had been played out to a daily crowd of 4,000 fans at Djokovic's tennis center on the banks of the Danube in Belgrade last week, while a similar crowd attended the Zadar event.

And local media reported that social distancing measures were respected by neither fans nor players in either venue. Djokovic was pictured playing basketball with Dimitrov and also embracing other players in the tournament.

Djokovic and other players including Belgrade winner Dominic Thiem were also seen partying bare-topped at a packed night spot in the Serbian capital.

Thiem has since traveled to the south of France to play in another exhibition tournament in Nice. There has been no word on whether he has been tested.

Commenting on social distancing measures during the Belgrade leg, Djokovic argued that both Serbia and the region had been relatively successful in containing the virus.

But the Adria Tour had already suffered an embarrassing setback when the planned Montenegro leg of the four-nation tournament was cancelled when it became apparent Serbia's health requirements did not match up to those of Montenegro.

Australian tennis star Nick Kyrgios called it a "boneheaded decision to go ahead with the 'exhibition'", while Britain's Andy Murray called it "a lesson for all of us."