Hamas Says West Bank Annexation would be 'Declaration of War' 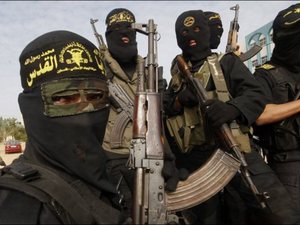 Gaza rulers Hamas warned Thursday that Israel's planned annexation of parts of the occupied West Bank would amount to a "declaration of war" against Palestinians.

"The resistance considers the decision to annex the West Bank and the Jordan Valley to be a declaration of war on our people," said Abu Ubaida, spokesman for Hamas's armed wing.

hey Hamas you have been at war with Israel for over 50 years and what have you accomplished? Hamas and the PLO are the Palestinian people's worse enemies...

What!!?? Another expation of the state of Israel!!!??? The true nature of the jews is roubing...

As someone whose native language is English, could you please enrich my vocabulary by explaining what the words "expation" and "roubing" mean.

He’s a fake Portuguese, you know him under various aliases, he’s a well known loser on naharnet.

So until now there was peace between Hamas and Israel ?