Juventus Move in for the Kill in Serie A Title Race 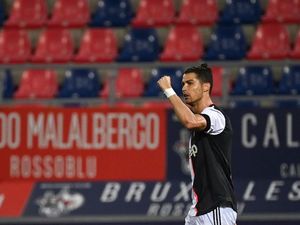 Cristiano Ronaldo's Juventus host struggling Lecce on Friday looking to take advantage of a midweek slip-up by nearest challengers Lazio and move seven points clear at the top of Serie A.

The eight-time reigning champions bounced back from their Italian Cup final defeat at the hands of Napoli and were the only one of the top three in Italy to win in the league this week with their 2-0 victory in Bologna on Monday.

Fabio Liverani's Lecce held Juventus to a 1-1 draw in the reverse fixture at home in the boot of Italy in October, and shocked Napoli 3-2 in the San Paolo in February.

But the southerners, who lie in the relegation zone, lost 7-2 to Atalanta just before the coronavirus lockdown in March and returned with a 4-1 thumping by AC Milan on Monday. A return to Serie B looks likely on this form.

Lazio host Fiorentina on Saturday filled with regret after losing their first league game in nine months, falling 3-2 at Atalanta on Wednesday after surrendering a two-goal lead.

"Unfortunately the title race gets more complicated and we regret this," said Lazio coach Simone Inzaghi. The Roman outfit last won Serie A two decades ago.

Inter Milan's title hopes stalled further in a 3-3 draw with Sassuolo on Wednesday which left them eight points behind Juventus with a tricky trip to Parma awaiting on Sunday.

Antonio Conte's men need a result to consolidate third position with Atalanta just four points behind in fourth before their game at strugglers Udinese.

Atalanta have been in incredible form with 77 league goals this season -- 25 more than Juventus -- and 14 in their last three games.

"Wins like the one against Lazio give you a very important boost," said Atalanta coach Gian Piero Gasperini.

"We showed a lot of heart to come back in such a game against a team that is fighting for the Scudetto.

"We want to return to the Champions League. We are in a good position, but it's still not sealed.

"Udinese? Playing every three days there is no time to celebrate. The games are all complicated, with no fans. You need to have your wits about you, always."

Roma and Napoli, occupying the two Europa League qualifying berths behind Atalanta, both returned from the long shutdown with wins, and want to stay in touch with the top four with 11 games left to play.

"Atalanta are in a great spell of form so we cannot afford to drop any points," said Roma coach Paulo Fonseca.

41 - Points gap between Juventus and Lecce