Trump to Go Ahead with New Jersey Trip despite Quarantine Warning 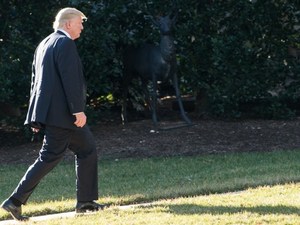 The White House said Thursday President Donald Trump will travel to New Jersey this weekend as planned even though it is one of three states recommending that people who have been to coronavirus hot spots self-quarantine for two weeks.

"The president of the United States is not a civilian," spokesman Judd Deere said when asked about the specific case of Trump having traveled Tuesday to Arizona, where new cases of the virus are up sharply.

"With regard to Arizona, the White House followed its COVID mitigation plan to ensure the president did not come into contact with anyone who was symptomatic or had not been tested," Deere said.

"Anyone traveling in support of the President this weekend will be closely monitored for symptoms and tested for COVID and therefore pose little to no risk to the local populations," Deere added.

Trump is scheduled to go to his golf course in Bedminster, New Jersey this weekend with a pool of journalists as is traditional for such trips.

The governors of New Jersey, New York and Connecticut announced Wednesday that anyone traveling there who has been in a state with a rising infection rate should self-quarantine for 14 days.

New York Governor Andrew Cuomo said the state could not legally keep people out but warned that those who do not follow this recommendation could be fined.