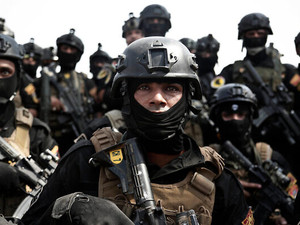 Elite fighters from the Counter-Terrorism Service raided a headquarters in southern Baghdad used by Kataeb Hezbollah, a pro-Iran faction also identified as Brigade 45 of the Hashed al-Shaabi military force.

"Based on intelligence information, a CTS unit raided a base used by Brigade 45, seizing three rocket launchers and arresting 13 fighters," one of the officials said.

There was no official comment from the CTS or from Kataeb Hizbullah.

Since October, nearly three dozen attacks have targeted American interests in Iraq, including a range of military bases, the US embassy in Baghdad and US oil companies.

They have killed Iraqi, US and UK military personnel.

The US has blamed Kataeb Hizbullah for the attacks and has retaliated twice, in both cases after rockets killed US military personnel stationed at Iraqi bases.

Washington has pressured Baghdad to take tougher action against the group, and Thursday's late-night raid is the first of its kind.

Kataeb Hizbullah (KH) is a powerful faction within the Hashed al-Shaabi, a network of armed groups that have been integrated into the Iraqi security forces.

KH are known to be close to Iran, deeply opposed to the US presence in the region and in possession of "drones, guided missiles and other rockets of various sizes," according to its spokesman.

While it has never claimed responsibility for the attacks, it has hailed them as a way to pressure US forces to leave.

The CTS, meanwhile, was set up by US occupation forces following the 2003 invasion that toppled Saddam Hussein and is largely seen as a force friendly to Washington.

Its commander, Abdulwahab al-Saadi, was appointed last month by new prime minister Mustafa al-Kadhemi, and both men are considered by Washington as allies.

Under the new premier, Iraq and the US launched a strategic dialogue earlier this month to discuss military, economic and culture issues.

As part of the talks, Washington pledged to continue reducing the number of US troops in Iraq as part of the international coalition helping Iraq fight jihadist sleeper cells.

Last year, there were 5,200 US troops in the country but that number has dwindled as the US has pulled back from Iraqi bases and paused training due to COVID-19.

Iraq, meanwhile, pledged to hold the perpetrators of the rocket attacks accountable and Kadhemi recently convened his national security council to draw up a plan.

But the start of the talks coincided with a significant spike in missiles, with six incidents targeting American installations over the last two weeks.

The escalation shattered the relative calm that had settled in since March, after a period of particularly high tensions between Iran and the US spilt over into Iraq.

In January, a US drone strike on the Baghdad airport killed Iranian general Qasem Soleimani and the Hashed's deputy chief Abu Mahdi al-Muhandis.

Soleimani had been Iran's pointman on Iraq and wielded vast sway over political and military actors in Baghdad.

Iraq has repeatedly insisted that it does not want to get caught up in the tug-of-war between the US and Iran.

Send them to Guantanamo!