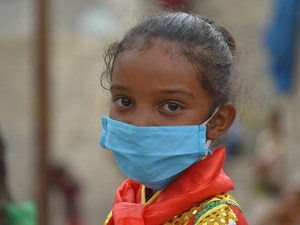 Millions of children in war-torn Yemen could be pushed to "the brink of starvation" due to a lack of funding amid the coronavirus pandemic, the UN children's agency said Friday.

The country's health system has all but collapsed since the war escalated in 2015, with the intervention of a Saudi-led military coalition to support the internationally-recognised government against the Iran-backed Huthi rebels.

A new UNICEF report warned of further deterioration of an already dire situation for children with the outbreak of the novel coronavirus.

It said that an additional 30,000 children could develop life-threatening severe acute malnutrition over the next six months, with the number of malnourished children rising up to 2.4 million overall -- around a 20 percent increase.

UNICEF quoted estimates from the Johns Hopkins Bloomberg School of Public Health that suggested an additional 6,600 children under the age of five could die over the next six months from preventable conditions.

"If we do not receive urgent funding, children will be pushed to the brink of starvation and many will die," Sara Beysolow Nyanti, UNICEF representative to Yemen, said in a statement.

"We cannot overstate the scale of this emergency as children, in what is already the world's worst humanitarian crisis, battle for survival as COVID-19 takes hold."

Yemen has so far officially recorded more than 1,000 cases of the disease, with 275 fatalities, but most clinics are ill-equipped to determine causes of death and there are ominous signs that the real toll is much higher.

UNICEF also said its health and nutrition services would be disrupted if it did not receive $54.5 million by the end of August.

It said that 23,500 children with severe acute malnutrition would be at increased risk of dying, up to one million children would not receive vital supplements, and 500,000 pregnant and breastfeeding mothers would go without nutrition support.

UNICEF added that five million children under the age of five would not be immunised against diseases, while 19 million people would lose access to healthcare.

Meanwhile, water and sanitation services for three million children and their families will begin to shut down from the end of July unless aid is secured, it added.

"Children in Yemen need lasting peace and stability in their country. Until that is achieved, we must do everything we can to save lives and protect childhoods," said Nyanti.

Since 2015, tens of thousands of people -- mostly civilians -- have been killed and millions displaced in the conflict that so far shows no signs of abating.

The agency had an unguarded moment on a "hot mike" when it blurted out, "Or, you could just stop the invasion by the Kingdom of Saudi Arabia, and the traveling sideshow of horrors of the UAE along side of it."