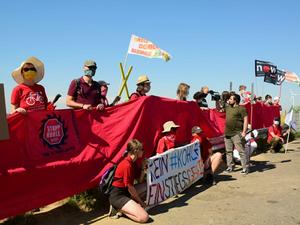 Several dozen climate activists occupied two opencast coal mines in Germany on Friday hoping to put pressure on the government to accelerate plans to phase out the polluting fossil fuel.

Around 60 protesters joined a demonstration at the Garzweiler mine near Cologne, police said, while about a dozen activists took part in a second protest at the Jaenschwalde mine in Brandenburg.

The Ende Gelaende (Game Over) campaign group said a total of about 100 people took part.

The occupation is being supported by other environmental groups, including the German branch of Fridays for Future.

Campaigners object to a planned coal law set to be passed by Germany's Bundestag lower house of parliament on July 3, complaining that its goal to phase out coal by 2038 lacks ambition.

"The planned law is a climate crime," Ronja Weil, a spokeswoman for Ende Gelaende said in a statement.

The activists want the date brought forward for Germany to meet its international commitments to slash carbon pollution.

However, the demonstrations are significantly smaller than protests last year that attracted thousands of participants.

In November, around 4,000 activists occupied several coal mines in eastern Germany in a coordinated protest, according to the organizers.

Thousands of jobs depend on coal in Germany's mining regions, but some residents are also threatened with the loss of their homes over a planned expansion of mining.

Opposition to the government's plans to shut down coal mines was seen as a factor behind a surge for the far-right AfD party in some regions last year.