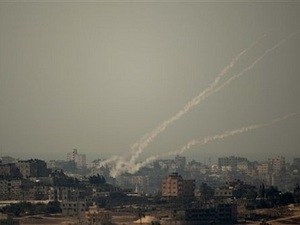 Two rockets were fired from the Hamas-controlled Gaza Strip towards Israeli territory on Friday, the army said.

"Two rockets were fired from the Gaza Strip towards Israeli territory," the Israeli military said in a statement, after earlier saying "sirens sounded in the area surrounding the Gaza Strip."

Medics said the sirens sounded in the Israeli district of Sderot.

It was the first reported rocket fire from the Gaza Strip since early May.

It comes the day after Hamas, an Islamist movement, warned that Israel's planned annexation of parts of the occupied West Bank amounted to a "declaration of war."

Israel's proposal to annex its settlements in the West Bank and the Jordan Valley form part of a broader U.S. peace plan published in January.

The proposals foresee the ultimate creation of a Palestinian state on the remaining West Bank territory and the Gaza Strip.

But the plan falls far short of Palestinian aspirations, with a state on reduced territory and without east Jerusalem as a capital.

Hamas and Israel have fought three wars in recent years, with the latest conflict in 2014 killing 2,251 Palestinians and 74 people on the Israeli side.

There are no official relations between the two sides. The Palestinian Authority, a separate administration based in the West Bank, cut its cooperation with Israel last month.