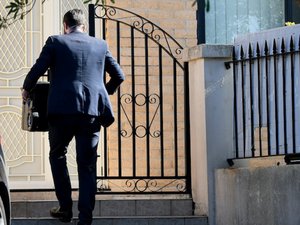 An Australian lawmaker whose home was raided amid an investigation into Chinese influence operations accused his foes of a "political lynching" Monday, as he denied any wrongdoing.

Police and intelligence agents raided the home and office of New South Wales state legislator Shaoquett Moselmane at dawn on Friday, part of a months-long investigation into foreign political interference.

Moselmane claimed in a statement that he was "not a suspect" in the probe and that he had done nothing wrong.

"I'm under no illusion that this is a serious investigation," said the lawmaker, who is being suspended from the centre-left Labor opposition.

"Sadly, the political lynching has already commenced. Let me tell you: I have done nothing wrong."

Details of the investigation are not publicly known, but Moselmane's praise for China, frequent trips there and hiring decisions have previously raised suspicions even among Labor party colleagues.

"The investigation is linked to other people allegedly advancing the goals of a foreign government, namely the People's Republic of China," Moselmane said.

He criticised the media and vowed to cooperate with the probe "subject to legal advice and exercising my rights to silence as any citizen is afforded."

Friday's raid came after months of escalating tensions between Australia and a Chinese government keen to translate its economic growth into diplomatic and military clout in the Asia-Pacific region and beyond.

Last year the former head of the Australian Security Intelligence Organisation, Duncan Lewis, said China wanted to "take over" Australia's political system with an "insidious" and systematic campaign of espionage and influence peddling.

The government passed foreign-interference legislation following revelations that wealthy businessmen with links to Beijing had been bankrolling local parties and candidates across the political spectrum.

China's Ministry of Foreign Affairs said it had seen reports of the raid and denied interference anywhere.

A spokesperson accused some Australian politicians of being "infected with Sinophobic bigotry" and claimed they were "fabricating baseless crimes to smear and demonise standard visits and co-operation between Chinese and Australians."

Moselmane defended his trips to China, saying they had largely been to deliver wheelchairs, including to orphans.

He insisted his rave reviews of Xi Jinping's handling of the coronavirus pandemic echoed comments from US President Donald Trump, Vice President Mike Pence and the World Health Organisation.