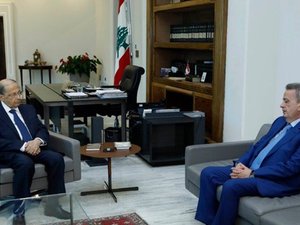 President Michel Aoun held talks with Central Bank governor Riad Salameh and discussions focused on the bank’s measures to address the monetary situation in the country, in light of a crippling economic crisis, the National News Agency reported on Monday.

Salameh said he briefed the President on the electronic platform, “Sayrafa,” that was established by the Central Bank to control and monitor the foreign exchange operations.

Despite efforts to control the currency depreciation, the Lebanese pound sold for more than 7,000 to the dollar on the black market. The pound had been pegged at 1,500 to the dollar since 1997.

Despite government efforts to manage the currency crash — including injecting dollars into the market and setting a higher rate for specific transactions — chaos prevailed and the parallel currency market continued to thrive.

Highly indebted Lebanon is in the throes of financial and economic crises, made worse by restrictions imposed to combat the coronavirus in March. Political rivalries have also complicated negotiations with the International Monetary Fund, which the Lebanese government has asked last month for $10 billion in financial assistance.