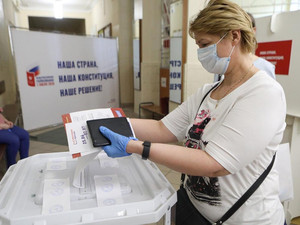 Some 76 percent of respondents voted for the package of amendments, which range from better pensions and minimum wages to a reset of term limits that would allow President Vladimir Putin to run again in 2024 and potentially stay in power until 2036.

The vote, which the opposition has slammed as illegal and prone to rigging, began last week and is due to end on Wednesday.

VCIOM, which stands for the All-Russian Public Opinion Research Centre, polled more than 163,000 voters in 25 regions, with about 70 percent agreeing to say how they voted.

The co-chairman of election monitoring group Golos, Grigory Melkonyants, told Business FM radio that the publication of figures before the end of voting could unduly "influence the will of citizens".

This is why the publication of exit polls is banned before the end of voting, he noted.

VCIOM said it decided to publish the figures because of "high demand" for the data and dismissed the idea that it could influence the outcome.

"It's not against the law to publish," the centre's director Valery Fyodorov told AFP in an emailed comment.

Election commission chief Ella Pamfilova said the body had recommended to wait until the end of voting but that the centre did not do anything illegal.

The constitutional vote has to abide by its own special law, rather than Russia's regular election legislation, which forbids publication of data during a "silent period" immediately before and during voting.

"The law (on the constitutional vote) does not regulate this," Pamfilova told Business FM radio.

Voting started in Russia on Thursday after a decision to spread the plebiscite over a week to avoid crowds during the coronavirus epidemic.

Advertisements running frequently on television ask Russians to vote without any mention of the clause that effectively "zeroes" Putin's time in the Kremlin and opens the possibility of him staying on for two more terms until 2036.

The Kremlin reluctantly postponed the vote, originally scheduled for April 22, as coronavirus cases increased and officials imposed restrictions to slow the spread.