Greens Up Pressure on Macron after French Election Wins 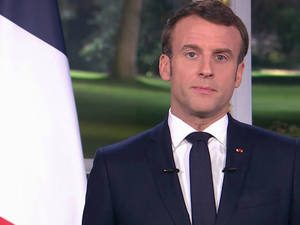 France's Greens on Monday urged President Emmanuel Macron to prioritise the environment as they savoured big wins in municipal elections, seen by many as a rebuke of the centrist leader's top-down governing style during his first three years in office.

Yannick Jadot, head of the Europe Ecology - Green Party (EELV), said the results proved that Macron had been "in denial" over growing public demand for ambitious measures to fight climate change.

Jadot told Europe 1 radio the EELV would not join Macron's government as part of a widely expected cabinet shake-up, saying instead the president should enact "as he promised" 149 measures proposed this month by his Citizen's Convention on Climate.

Macron will meet the council's members on Monday when he plans a "first response" to their proposals, which included reducing motorway speed limits and making "ecocide" a crime.

Voters handed the Greens control of key cities including Lyon, Bordeaux and Strasbourg, while Socialist Paris Mayor Anne Hidalgo was re-elected after forming an alliance with the EELV.

Traditional rightwing and Socialist parties managed respectable showings, with the rightwing Republicans winning in more than half of cities with more than 9,000 residents.

Macron's Republic on the Move, however, was roundly rejected, with only five of 10 ministers in his government securing wins in the cities they contested.

They included his Prime Minister Edouard Philippe -- even though he isn't a card-carrying LREM member -- who was elected mayor of the Atlantic port city of Le Havre, heightening speculation he could leave the government and give Macron the possibility of naming a more left-leaning premier.

The delayed second round of local polls took place more than three months after the March 15 first round held two days before France's coronavirus lockdown.

Government spokeswoman Sibeth Ndiaye expressed "disappointment" late Sunday over the LREM's poor showing, which analysts attributed to Macron's failure to build the party into a viable force at the local level.

"There are places... where our own internal divisions brought us to results that were extremely disappointing," Ndiaye told French television.

Hidalgo, who has vowed to limit the use of cars in the French capital, thanked voters in her victory speech for choosing "a Paris that breathes, a Paris that is more agreeable to live in".

Marine Le Pen's far-right National Rally, meanwhile, claimed a big victory in Perpignan in the south, giving it control of a city with more than 100,000 inhabitants for the first time since 1995.

Yet overall, only 40 percent of the country's 16.5 million eligible voters cast ballots, a record-low turnout that reflected both disapproval of Macron and coronavirus contagion fears.

Macron expressed his concern over the low turnout and acknowledged the elections were marked by a "green wave", the presidency said.

Polls suggest he is likely to face Le Pen in a presidential vote now just 22 months away, a likelihood that will loom large in any government reshuffle.