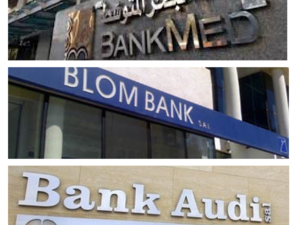 Lebanese banks sought on Monday to encourage depositors to withdraw trapped dollar savings in Lebanese pounds by increasing their exchange rate, as the national currency continued its tumble on the black market.

Banks have gradually restricted dollar transfers abroad and withdrawals since last year, effectively trapping dollar savings in accounts unless their owners want to convert them into Lebanese pounds.

Several banks said on Monday they had increased their buying rate from 3,000 to 3,850 pounds to the greenback.

The move comes as talks stall between Lebanon and the International Monetary Fund to lift the nation out of its worst economic crisis since the 1975-1990 civil war.

The Lebanese currency officially remains pegged at around 1,507 pounds to the dollar, but the black market rate on Monday morning reached a new record of 8,000, according to several specialized websites.

The cap on dollar withdrawals has led those in need of the foreign currency to resort to changers on the black market instead, sending the exchange rate there soaring.

The authorities have struggled to stem the collapse, with the central bank on Friday launching an online platform in an apparent move to oversee money changing operations at an official rate.

"The central bank is just printing currency to cover for any shortages in foreign currency, which is a huge mistake" as it will simply lead to more inflation, he said.

The IMF's managing director Kristalina Georgieva on Friday said talks with Lebanon had been "difficult."

"It has been really difficult and the core of the issue has been whether there can be unity of purpose in the country that can then carry forward a set of very tough, but necessary measures," she said.

"We do not yet have reason to say there is a breakthrough."

The director-general of the Finance Ministry, Alain Bifani, resigned on Monday, the official National News Agency said, following two decades in the position that saw him take part in the IMF talks.

The news came after advisor to the Ministry in talks with the IMF, Henri Chaoul, also stepped down earlier this month over "no genuine will to implement either reforms or a restructuring of the banking sector, including the central bank."

Lebanon, which has a sovereign debt equivalent to 170 percent of its GDP, defaulted on its debt in March for the first time in its history.

The economic crunch has sparked unprecedented protests since October and is plunging entire segments of the population into poverty.

Tab3an... I have a mitwelian crook who wants to buy a hill in the south from me for 300 000 dollars in cash. What a filthy POS.