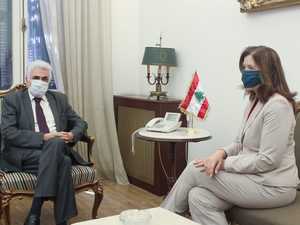 U.S. Ambassador to Lebanon Dorothy Shea held talks Monday with Foreign Minister Nassif Hitti, after which she announced that the page has been turned on a controversial ruling against her by a Lebanese judge.

"Foreign Minister Hitti and I just had a positive meeting in which we reinforced the importance of the bilateral relationship to each country. Among the issues we discussed was the recent court ruling. We turned the page on this unfortunate distraction so we can all focus on the real crisis at hand, which is the deteriorating economic situation in Lebanon," Shea said after the talks.

"The United States stands ready and will continue to help the Lebanese people as the government takes the necessary steps to address the underlying causes," she added.

"We value our cooperation to advance our many shared interests and mutual objectives, especially in these difficult times," Shea went on to say.

She also assured that the U.S.-Lebanese relation is "a strong bilateral relationship that will continue to benefit the people of both countries."

State-run National News Agency quoted Hitti as saying during the meeting that freedom of the press and opinion are a "sacred right" in the country, which enjoys wider freedoms than many other Arab countries.

Hitti also said that it is important that Beirut and Washington continue their cooperation in all fields to help Lebanon weather the crisis.

Hitti had summoned the ambassador to the meeting on Monday in the wake of a storm of controversy over her recent remarks and Judge Mohammed Mazeh's move against her.

Mazeh, who is the urgent matters judge in the southern city of Tyre, has issued a ruling banning local and foreign media working in the country from airing or publishing Shea's comments for a one-year period.

He said he acted after receiving a complaint from a citizen who considered Shea's comments "insulting to the Lebanese people."

During an interview with Saudi-owned news channel Al-Hadath aired on Friday, Shea had said that the United States has "grave concerns about the role of Hizbullah," describing it as "a designated terrorist organization."

"It has siphoned off billions of dollars that should have gone into government coffers so that the government can provide basic services to its people," she said. "It has obstructed some of the economic reforms the Lebanese economy so desperately needs," she added.

“ Mazeh, who is the urgent matters judge in the southern city of Tyre, has issued a ruling banning local and foreign media working in the country from airing or publishing Shea's comments for a one-year period. “

This low life judge isn’t familiar with freedom of speech. If Lebanon is offended it can ask the US to replace this ambassador. It hasn’t done so because there are no grounds to justify such action.

This magistrate proved once again he’s a corrupt Hizbala shill.