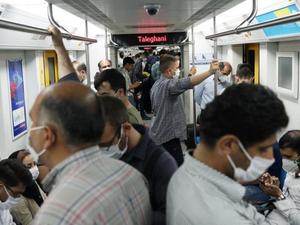 Iran's coronavirus epidemic is still in its first wave, the health ministry said Tuesday, a day after reporting the highest single-day death toll since the country's outbreak began in February.

"The coronavirus is currently peaking in border provinces or cities which did not experience a peak in the first months of the outbreak," said ministry spokeswoman Sima Sadat Lari.

According to Lari, Iran would only have a second wave if there was another rise in cases in provinces that "had a significant peak" when the first cases were declared.

Iran reported its first two COVID-19 cases on February 19 in the holy city of Qom.

The central province of the same name quickly became one of the worst-hit, along with the northern province of Gilan, a popular tourist resort.

Official figures have shown an upward trajectory in new confirmed cases since early May, when Iran hit a near two-month low in daily recorded infections.

Iran recorded 162 coronavirus deaths on Monday, its highest figure for a single day, raising the total to 10,670 out of more than 225,200 cases of infection.

Authorities have so far refrained from enforcing full lockdowns to stop the pandemic's spread and the use of masks and protective equipment has been optional in most areas.

Iran closed schools, cancelled public events and banned movement between its 31 provinces in March, but the government gradually lifted restrictions from April to try to reopen its sanctions-hit economy.

The increasing virus caseload has seen some previously unscathed provinces classified as "red" -- the highest level on Iran's colour-coded risk scale -- with authorities allowing them to reimpose restrictive measures if required.

They include Khuzestan, Hormozgan, Kurdistan, Kermanshah, Bushehr, West and East Azerbaijan, and Khorasan Razavi, all located along Iran's borders.