Solskjaer Warns Rashford, Martial to Improve or Risk Being Replaced 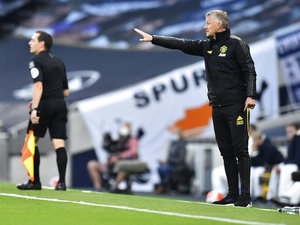 Ole Gunnar Solskjaer has challenged Anthony Martial and Marcus Rashford to improve, saying he is open to further strengthening his attack despite their impressive goalscoring form this season.

The Old Trafford giants are on course to have two players hit the 20-goal mark in the same campaign, in all competitions, since Dimitar Berbatov and Javier Hernandez in 2010/11.

"I think all three that we have talked about have had a good development this season -- but they can be so much better," he said ahead of his side's Premier League match at Brighton on Tuesday.

"All three, I'm still waiting to see them blossom because there's parts of their game that they still need to improve on."

Odion Ighalo arrived on loan in January to bolster United's attacking options and Solskjaer said the strikers know his desire for them to improve comes with a need to "make decisions for the team and the club".

"If you think you've got a divine right to be playing every game and doing so well that we're not going to look for players to replace you, you're in the wrong place," he said.

"I've been here for so many years myself as a striker and Teddy Sheringham comes in, Dwight Yorke comes in, Ruud van Nistelrooy comes in, Wayne Rooney comes in.

"We've always got to look at improving. And if they don't improve, well, we might have to look somewhere else to get better because we have to be better.

"We're too far away from where we need to be and want to be."

United, unbeaten in 14 games in all competitions, are sixth in the Premier League table, five points behind fourth-placed Chelsea in the race for a Champions League spot.

Solskjaer dismissed the notion that United have an easy run-in, with matches against a group of relegation strugglers to come.