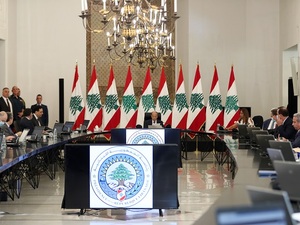 President Michel Aoun on Tuesday presided over a Cabinet session at the Baabda Palace that followed a meeting for the Higher Defense Council.

“Cabinet will discuss the financial and economic situations in the country and the Higher Defense Council’s recommendations, especially as to the security situation in the country, particularly in the South, and the issue of general mobilization,” the National News Agency said.

The Defense Council meanwhile recommended extending the so-called state of general mobilization over coronavirus until August 2.

During the Council’s meeting, Prime Minister Hassan Diab said that another wave of the pandemic is expected to reach Lebanon in October.

As for the security situation, security agencies were instructed to “preserve the safety and security of citizens, especially amid the economic, social and living situations that citizens are suffering from.”

The Council also asked judicial and security authorities to prosecute those who are “exploiting the difficult financial conditions to achieve illicit gains and disrupt security and public safety,” urging quick and severe penalties against them.