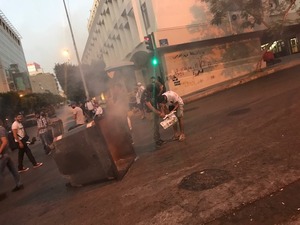 Protesters closed several major roads in Beirut and several regions on Tuesday amid rising anger as the currency hit a new record low on the black market, electricity cuts increased and the government raised the price of bread for the first time in more than a decade.

As prices increased over the past weeks, people have been rushing to supermarkets and groceries to buy goods. On Tuesday afternoon, Al-Makhazen Coop, one of the largest retailers in the country closed its stores in Beirut.

Outside one of the branches in Beirut's commercial Hamra district, an employee said they were running out of some products and they plan to open again on Wednesday. A statement posted at the gate apologized that some products were not available amid a rush by people to buy stuff.

Economy Minister Raoul Nehme told reporters after a Cabinet meeting that he will issue an order Wednesday to increase the price of 900 grams of bread, a main staple in Lebanon, by 33% to 2,000 pounds. He urged people not to stock flour at homes saying there is enough stocks in the country. Media reports later said that Prime Minister Hassan Diab has asked Nehme to reverse his decision.

Owners of bakeries have been complaining that prices of plastic bags, yeast and diesel have been rising urging the government to allow them to raise the price. People had to stand in long lines outside bakeries in recent days amid the rush.

Flour is subsidized in Lebanon and along with medicine and oil products, the central bank has been funding their imports at the official price of the U.S. dollar that stands at 1,507 pounds.

People were also buying candles as the electricity that is usually cut three hours a day in Beirut was cut for much of the day on Tuesday.

On the black-market, the dollar moved closer to 9,000 pounds on Tuesday marking another blow to many Lebanese who have seen their purchase power crash over the past months.

"If I sell I lose and if I don't I lose as well," said the owner of a perfume shop in Hamra street who asked that her name not be mentioned. "If I sell products today, I will have to buy them at a much higher price later."

"I sold nothing today," said the woman standing outside her shop.

In Beirut's Corniche al-Mazraa avenue and Verdun street, dozens of protesters used giant garbage bins to close the roads to protest the currency crash. Lebanese troops were on alert nearby as thousands of people were stuck in their cars.

Protesters also blocked the vital Naameh highway that links Beirut to the South and roads in Beirut's Hamra district.

On Monday night, a teenager was shot in the head while protesters against electricity cuts closed a road. The 14-year-old boy is critical condition and the army said it opened an investigation to know who was behind the shooting.

Stop paying your bills idiots. As soon as my savings were inaccessible, I stoped all sort of state related payments.

The whaabis monarchies and USA are putting a sword in the head of Cristians in the Lebanese political system... Convert or Die...

More like HA is holding a gun to the head of every Lebanese, do what we say or else...