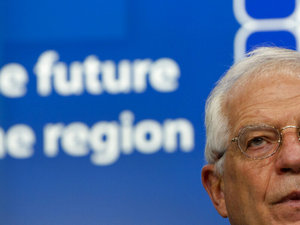 The European Union on Tuesday hosted virtually the fourth Brussels Conference on "Supporting the Future of Syria and the Region", co-chaired with the United Nations.

The Conference was the opportunity for the international community to “renew its economic and financial support for the countries and communities affected by the Syria crisis, notably Lebanon,” the EU Delegation to Lebanon said in a statement.

It noted that Lebanon is struggling today with the effects of an unprecedented financial and economic crisis, the socio-economic impact of the COVID-19 pandemic and the burden of a neighboring crisis that has lasted almost a decade.

“Throughout these years, Lebanese people have shown an overwhelming generosity and resilience in welcoming over a million Syrian refugees,” the EU statement said.

It added: “Because it is common burden and a shared responsibility, the European Union has stood by Lebanon, catering for the needs of the refugees, while supporting the Lebanese communities hosting them. Since 2012, we have invested more than 2.6 billion Euros to address the basic needs of Lebanese and refugees, and contribute to improving local infrastructure projects.”

“Only recently, we have stepped up our support to Lebanon in responding to the COVID-19 emergency by providing personal protective equipment, hygiene kits, infection prevention trainings, health education and awareness campaigns, and essential protection services to women and children who have faced violence and abuse during confinement. Earlier this month, a new package of assistance of 34.6 million Euros was released in key areas such as health, water, social assistance, sanitation and hygiene,” the statement said.

At the ministerial meeting of the Brussels IV Conference on Tuesday, the international community commended Lebanon’s extraordinary efforts in hosting the highest number of refugees per capita in the world.

“To respond to the increasing needs of Lebanese people and Syrian refugees, the European Union stressed its readiness to engage constructively with a government that is committed to implementing structural reforms and improving its system of governance,” the EU statement added.

It also stressed that the European Union stands with Lebanon and the Lebanese people during these “challenging times,” and is committed to its “unity, sovereignty, stability, political independence and territorial integrity.”