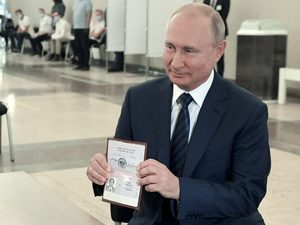 The Kremlin on Thursday hailed as a "triumph" overwhelming backing in a national vote on constitutional reforms to extend President Vladimir Putin's rule.

The Central Elections Commission announced that 77.92 percent of voters had backed the reforms with a turnout of 67.97 percent after all votes had been counted.

The Kremlin "definitely considers this as a triumph," presidential spokesman Dmitry Peskov told reporters, describing the vote as a "referendum on trust" in the Russian president.

Russians began voting last week on the package of constitutional changes proposed by Putin earlier this year, including a reset of presidential term limits allowing him to run twice again after his current six-year term ends in 2024.

"Now that Russians have given such support for changes to the constitution, this will all become the foundation for a better future for our country," Peskov said.

The result was seen by many as a foregone conclusion, however, and copies of the new constitution were already on sale in bookshops weeks ahead of the ballot.

Only the autonomous region of Nenets in the Russian Arctic came out against the reforms, with 55.25 percent of voters opposing the changes to the constitution.

The isolated and sparsely populated region where reindeer herding is the traditional way of life is facing unification with the neighbouring Arkhangelsk region in a move that has sparked a local opposition movement.

"You can't rule out that the topic of merging regions... influenced the result" Peskov said, while stressing that the region's voters were "an absolute minority."

Russia's two houses of parliament previously approved the amendments but Putin said they would only take effect if supported by a majority of voters.

Leading Kremlin critic Alexei Navalny condemned the poll, tweeting that it set "a record in faking votes" and the result had "nothing in common with people's views."

The Golos election monitoring group said Thursday it had received more than 2,100 complaints over possible election violations, including reports of employees being forced to vote.

The organisation described the vote as "unprecedented" in terms of violations, saying it would go down in history as an attack on the sovereignty of the people.

Election commission chief Ella Pamfilova rebuffed criticisms, saying in televised comments that "there is no doubt that the vote is valid and legitimate".