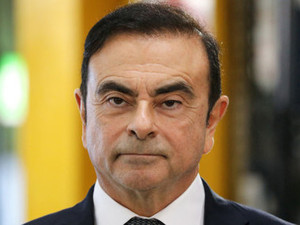 An Istanbul court ordered the release of five suspects after the trial began Friday into the audacious escape of former Nissan chief Carlos Ghosn from Japan to Lebanon via Istanbul in December, local media reported.

Ghosn, who faced multiple charges of financial misconduct that he denies, managed to slip out of Japan despite having handed over his three passports to his lawyers.

It is believed he transferred between private jets at an Istanbul airport after arriving from Japan before he flew on to Lebanon where he has been since his escape.

An airline employee, Okan Kosemen, and four pilots were charged with "illegally smuggling a migrant" and risk up to eight years in jail, according to the official Anadolu news agency.

They were arrested in January but were released from custody on Friday pending the end of the trial by the judge, the private DHA news agency reported.

They have been forbidden from travelling abroad.

Two flight attendants are also accused of not reporting a crime and face a one-year jail sentence, Anadolu reported, They are free pending trial.

The pilots and flight attendants deny the accusations.

The indictment said Ghosn was smuggled out in a large "foam-coated" musical instrument case which had 70 holes for air, DHA reported.

According to the Turkish prosecutor, Michael Taylor, a former member of US special forces, and Lebanese national George-Antoine Zayek, recruited an employee of private Turkish airline company MNG Jet to ensure Ghosn was able to transit through Istanbul.

The indictment said the MNG employee received several payments into his bank account totalling over 250,000 euros in the months before Ghosn's flight.

But during the hearing, Kosemen denied being paid to help Ghosn escape while the pilots and flight attendants said they were unaware he was on board any flight.

Kosemen told the court he became aware Ghosn was on board after a man called Nicolas Mezsaroz informed him via the Signal  communication app, Anadolu reported.

"The situation freaked me out," Kosemen said, quoted by Anadolu, after Mezsaroz apparently told him on the phone that he knew where the employee's wife worked and where his child went to school.

MNG filed a complaint in January alleging its aircraft were used illegally, and said at the time that one employee apparently admitted to falsifying the flight manifest to keep Ghosn off the passenger list.

Ghosn, who led Nissan for nearly two decades before his arrest in 2018, was out on bail awaiting trial when he fled Japan.

Ghosn's escape proved highly embarrassing for Japan, which has sought to extradite the former Nissan chief.

Lebanon does not have an extradition treaty with Japan, and has so far resisted requests for Ghosn's return to Tokyo,

In February, Nissan filed a civil lawsuit to reclaim some 10 billion yen ($90 million) from Ghosn for what it called "years of his misconduct and fraudulent activity."