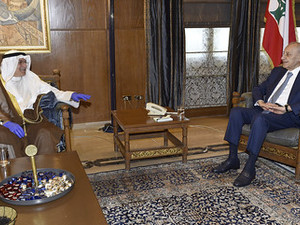 The National News Agency said discussions tackled “the general situations in Lebanon and the region and bilateral ties between Lebanon and Kuwait.”

Asked about the reason behind the Kuwaiti ambassador’s visit, Berri said he expects a positive development in the near future following “the meeting with the ambassador of a brotherly and friendly country.”

Berri also held talks Monday with the ambassadors of Iran and Austria.

So Berri expect the oil-rich Gulf nations to fill up the Lebanese coffers again. I doubt if they are that stupid. Its a bottomless pit.

Yeah to fill up the Lebanese they will, but not the state coffers I can assure you!