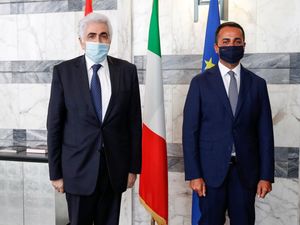 The meeting “can be capitalized on, because Italy is very keen on standing by Lebanon, which is going through a dangerous economic crisis that might subject the entire population to grave threats,” a diplomat from the Italian Foreign Ministry said in a phone interview with Lebanon’s National News Agency.

A statement issued by the Italian ministry said Di Maio expressed his country’s support for “the reform process that the executive authority led by Hassan Diab is carrying out.”

“It is an essential condition for overcoming the current difficulties, reviving the economy and meeting the legitimate aspirations of the Lebanese people,” the Ministry quoted Di Maio as saying.