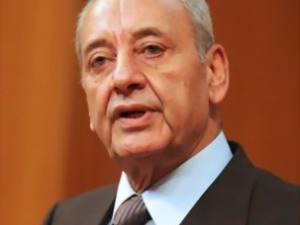 Parliament Speaker Nabih Berri on Tuesday warned against putting the burden of the financial crisis on the shoulders of bank depositors.

“Placing the burden of the financial crisis on the shoulders of Lebanese depositors is an attempt to evade reality and it is a crime that we will not allow anyone to commit,” said Berri in a meeting with a delegation from the Economic Committees led by ex-minister Mohammed Choucair.

“The money of depositors in banks is the most sacred thing as we have already stated,” Berri added.

He noted that Lebanon can only be rescued and pulled out of its crisis through “the solidarity of the Lebanese.”

“The top priority of any government must be to seek salvation, especially as to matters related to the country’s security and the protection of citizens’ livelihood and lifelong savings,” Berri added.

He also pointed out that “the cornerstone for receiving foreign assistance is reform.”

“Confidence can only be created and restored through reform,” he added.

The more you say, the less you are doing.