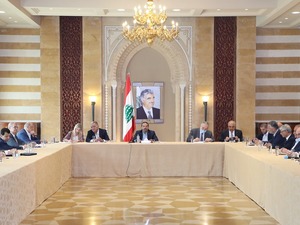 Al-Mustaqbal parliamentary bloc on Tuesday noted that claims that ex-PM Saad Hariri is seeking to return as premier are aimed at misleading the public opinion and deviating attention.

“Officials close to the Presidency and the government are talking in their meetings about a need to change the government and at the same time they are suggesting that ex-PM Saad Hariri is seeking to return to the premier post,” said the bloc in a statement issued after its weekly meeting.

“These remarks are aimed at disinformation and at misleading the public opinion,” the bloc added.

“The camp which formed the government must shoulder the responsibility of confronting the crisis, finding the appropriate solutions and rescuing the country through launching reforms instead of holding others responsible and depicting the matter as if there are private and personal conditions,” Mustaqbal said.

It accordingly called on the government reform the electricity sector and reach a “reconciliation with Arab brothers and the international community” instead of “boasting about achievements that only exist in the imagination of those talking about them.”