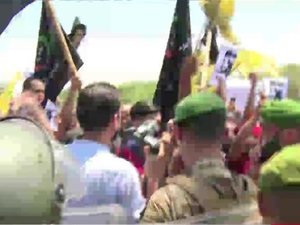 A rally was held Wednesday morning near Beirut’s airport in protest at the visit of the U.S. army's Central Command chief to Lebanon, the National News Agency said.

Al-Jadeed television said scuffles erupted between Lebanese troops and the demonstrators. It did not elaborate.

I just hope that the US stops all sorts of help to the Lebanese people and state! I wish to see Russia and China's support who both set vetoes on the UN help to civilians in Syria.
I can assure you that we will follow the Venezuela scenario in a more cannibalistic way!

US sanctions against Lebanon to please Netanyahu helps the Lebanese people??? What an idiot!

China and Russia vetoed the UN resolution because the US is trying to starve the Syrian civilians who mostly live in government controlled areas.

What US sanctions on Lebanon?
Are you even Living anywhere near our Milky Way, let alone our country?
Remember, those who don’t learn from history’s mistakes are bound to repeat them.

I was going to commit yesterday that most likely these demonstrators are either Hizbos or a combinations of radical leftists. When I saw the news reports on tv and saw the pic it confirmed what I knew. Hizbos and communists.