Hariri Meets Aude, Says Not Seeking to Return as PM 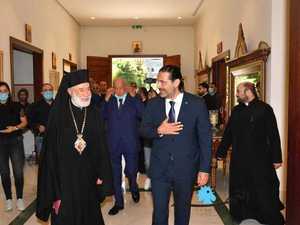 Ex-PM Saad Hariri held talks Wednesday with Greek Orthodox Metropolitan of Beirut Elias Aude after which he reiterated that he is not seeking to return to the PM post.

“I wanted to visit His Eminence, Metropolitan Aude so that we work anew for the capital Beirut and we have rejected all calls for dividing the capital and Lebanon,” Hariri said after the meeting.

Asked whether pulling Lebanon out of its crisis requires him to return as PM and whether his condition is the absence of Jebran Bassil from any Cabinet’s line-up, Hariri said: “I’m not seeking to return.”

“What I’m saying is that any premier in power must have the capabilities to be able to to work and these capabilities need several factors, including the presence of experts who truly know the affairs of their ministries and not merely technocrat ministers,” Hariri added.

“They should understand the nature of true reform,” he said.

Stresssing that reform should occur according to “scientific rules,” Hariri reminded that his last government had taken 21 decisions in this regard.

“Had they been implemented, things would have started to improve in the country,” he went on to say.

It's always entertaining to see a Coward giving excuses for his inability to fight his enemies... "Oh No, it's not that I have no courage to face my enemy, I just don't want to!" Lol... How cute