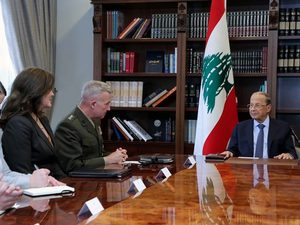 McKenzie met with President Michel Aoun at Baabda Palace, where he “reaffirmed the importance of preserving Lebanon’s security, stability, and sovereignty, and underscored the importance of the strong partnership between the United States and the Lebanese Armed Forces,” the embassy said in a statement.

Aoun for his part called for boosting military cooperation between the two countries, according to a tweet posted by the Lebanese Presidency.

He also lauded "the ongoing cooperation between the Lebanese and American armies in the fields of training and equipment," remembering "the support that the Lebanese Army received from the U.S. army against terrorists during the Fajr al-Juroud battle."

"The army managed to eradicate the members of the terrorist groups' sleeping cells and it is continuing to pursue them," the president added.

McKenzie was accompanied by USCENTCOM officials and officers, as well as U.S. Ambassador to Lebanon, Dorothy Shea, and the U.S. Defense Attaché, Robert Meine.

The one-day visit to Lebanon also included meetings with senior Lebanese political and defense leaders, including representatives of the Ministry of Defense and the Lebanese Armed Forces, office calls at the U.S. Embassy, and a brief stop at memorials honoring the memory of fallen soldiers.

Finally someone important meeting the Baabda schmuck. Look at the smile on his face, he’s meeting a real General for the first time.