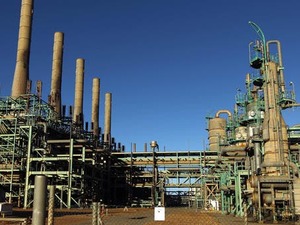 The Libyan National Oil Company announced Friday the resumption of oil production and exports after a nearly six-month shutdown due to conflict dividing the country.

"The NOC has lifted force majeure on all oil exports from Libya," the company said in a statement, adding that production will take time to return to previous levels.

"The increase in production will take a long time due to the significant damage to reservoirs and infrastructure caused by the illegal blockade imposed on January 17," the statement said.

Libya, which has the biggest proven reserves of crude in Africa, is torn between the rival powers of the UN-recognised Government of National Accord (GNA) based in Tripoli and strongman Khalifa Haftar, who rules over the east and part of the south.

Since January, groups loyal to Haftar, who was pushing an offensive to seize the capital, have been blocking the production and export of oil from the country's most important fields and terminals, claiming they want a fair distribution of the oil revenues managed by Tripoli.

The NOC had invoked force majeure in response -- a measure used in exceptional circumstances that allows the NOC to be exonerated from liability in the event of non-compliance with oil delivery contracts.

NOC boss Mustafa Sanalla welcomed the resumption of oil production, saying: "We are very glad finally to be able to take this important step to national recovery," according to the statement.

A first ship was due to start loading crude from the oil port Al-Sidra in the east of the country, the statement added.

The NOC had recently reported talks, "supervised by the United Nations and the United States", to allow the resumption of production, the halt of which caused losses of more than $6.5 billion, according to the company.

Oil exports are the source of almost all state revenue in Libya, which has been mired in chaos since the ouster and killing of dictator Moamer Kadhafi in a 2011 NATO-backed uprising.