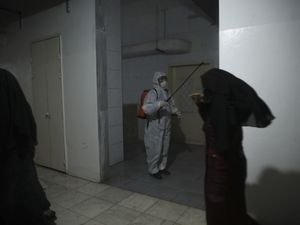 At least two doctors in Syria's opposition-held northwest have been infected with the coronavirus, according to a monitoring group Saturday, raising the total number of cases in the overcrowded rebel enclave to three.

The Syrian opposition and militant groups control the Idlib area, which is home to more than 3 million people, most of them displaced by the war and living in tent camps and overcrowded facilities. Local health facilities have been targeted in Syrian government attacks that have recently displaced nearly a further million people.

The Early Warning and Alert Response Network, which reports on the virus, said the two doctors had been in touch with patient zero, another doctor who works in a hospital in Idlib. The first case was reported on Thursday and the hospital where the doctor works has since suspended its operations and quarantined patients and support staff to carry out testing.

The enclave is now under threat of losing crucial humanitarian aid access. Moves by Russia, a major ally of the Syrian government, at the U.N. Security Council are threatening to shut down border crossing between the rebel-held enclave and Turkey.

A divided U.N. Security Council failed for a second time Friday to agree on extending humanitarian aid deliveries to the area from Turkey as the current U.N. mandate to do so ended.

Russia and China vetoed a U.N. resolution backed by the 13 other council members that would have maintained two crossing points from Turkey for six months. A Russian-drafted resolution that would have authorized just one border crossing in the area for a year failed to receive the minimum nine "yes" votes in the 15-member council.

A new vote is expected Saturday. Germany and Belgium, who insist two crossings are critical especially with the first COVID-19 cases being reported in Syria's northwest, circulated a new text that would extend the mandate through the Bab al-Hawa crossing into Idlib for a year and the mandate for the Bab al-Salam crossing — which Russia wants to eliminate — for three months to wind up its activities.

Russia, Syria's closest ally, has argued that aid should be delivered from within Syria across conflict lines. But the U.N. and humanitarian groups say aid for 2.8 million needy people in the northwest can't get in that way.

Kevin Kennedy, the U.N.'s Regional Humanitarian Coordinator for the Syria Crisis, told The Associated Press that leaving only one crossing open would make aid delivery more time-consuming, more costly, and more dangerous in a territory that is controlled by different armed groups.

"The pipeline to aid people should not be subject to these political considerations from any side in this conflict," Kennedy said late Friday.

A day after the detection of the first COVID-19 case, hospitals in northwest Syria announced they would be suspending non-emergency procedures and outpatient services for at least one week. Schools were to shut down until further notice.