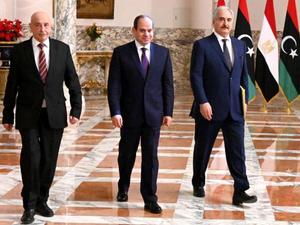 Libya's parliament has passed a motion authorising Egypt to intervene militarily if needed to safeguard the "national security" of both countries in light of what it termed a Turkish "occupation".

Haftar is supported by neighbouring Egypt and the United Arab Emirates, while the Government of National Accord (GNA) in Tripoli has the backing of their regional rivals Turkey and Qatar.

In a resolution passed late Monday, the legislature in the eastern city of Tobruk authorised "Egyptian armed forces to intervene to protect the national security of Libya and Egypt if they see an imminent danger to both our countries".

Egypt's President Abdel Fattah al-Sisi warned last month that Egypt could send troops into Libya, after the unity government pushed back Haftar's forces from around Tripoli following months of stalemate.

Libya has seen years of violence since the ouster of long-time leader Moamer Kadhafi in a NATO-backed 2011 uprising, with the GNA and the eastern parliament, elected in 2014, vying for power.

Relations between their respective backers in Cairo and Ankara have been deteriorating since 2013, when Sisi led the army's ouster of Islamist president Mohamed Morsi, a Muslim Brotherhood figure close to Turkey.

Haftar launched an offensive in April 2019 to seize the capital, but the GNA took advantage of Turkish military support including drones to re-impose its control over Libya's northwest.

In its statement late Monday evening, the parliament said Libya and Egypt should work together "to guarantee the occupier's defeat and preserve our shared national security" in the face of "the dangers posed by the Turkish occupation".

While Libya's parliament rejects the unity government's legitimacy, it is also interally divided into pro- and anti-Haftar factions.