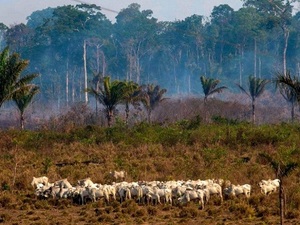 One fifth of beef and soybean exports from Brazil to the European Union is produced on land that was illegally deforested, according to a report published in Science magazine.

The news comes amid fierce resistance by some European countries to the signing of a free trade agreement between the European Union and Mercosur -- made up of Brazil, Argentina, Paraguay and Uruguay -- due to increased deforestation of the Amazon in Brazil since Jair Bolsonaro became president 18 months ago.

A dozen researchers from Brazil, Germany and the United States used a powerful software to analyze 815,000 rural properties and identify areas of illegal deforestation in the Amazon and Cerrado, the vast tropical savanna in the center of Brazil.

"Between 18 and 22 percent -- possibly more -- of annual exports from Brazil to the EU are the fruit of illegal deforestation," said Raoni Rajao, the project leader and professor at Brazil's Federal University of Minas Gerais (UFMG).

The authors stressed, though, that "close to 80 percent of Brazilian farmers respect the Forest Code" and that the new software would allow authorities to "take rapid and decisive measures against offenders."

Brazil has the opportunity to "become an environmental world power that protects its ecosystems, while feeding the world," said the report's authors.

The country "already has the means and only needs the political will" to do so, they added.

Nevertheless, Brazil appears to be heading in the opposite direction.

"Brazil's jungles are at breaking point," said professor Britaldo Soares-Filho, one of the report's authors and a researcher at UFMG.

According to official data, a record 3,700 square kilometers (1,430 square miles) of the Amazon were deforested in the first half of the year, up 25 percent from the same period last year.

The report also stresses "the responsibility of all foreign markets in this process."

Deforestation by the Brazilian agriculture industry "destroys the forest to gratify the European appetite," said the report's authors.

Brazil, the world's largest producer of soybeans, has quadrupled production over the last two decades and it is expected to add another third in the next 10 years.

Pig farmers in the European Union, the world's largest exporter of pork, depend on Brazilian soy for feed, particularly with growing demand from Asia.