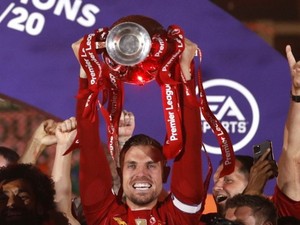 Liverpool captain Jordan Henderson was named the Football Writers' Association player of the year on Friday for leading the Reds to their first league title in 30 years.

As well as making his presence felt in 30 Premier League games this season as Liverpool have surged to the title with an 18-point lead at the top of the table, Henderson led by example off the pitch during football's three-month shutdown due to coronavirus.

He spearheaded the PlayersTogether initiative during the lockdown which saw players team up with to raise money for Britain's National Health Service.

"I accept it on behalf of this whole squad, because without them I’m not in a position to be receiving this honour. These lads have made me a better player, a better leader and a better person," said Henderson.

“If anything I hope those who voted for me did so partly to recognise the entire team’s contribution."

As well as the top five, 10 other players received votes from FWA members.