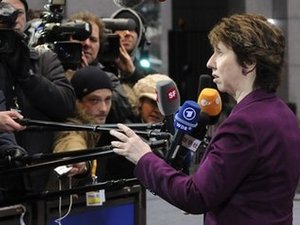 Egypt loomed large over talks of the Middle East Quartet in Germany on Saturday, with fears that a change of regime in Cairo could throw into turmoil an already deeply troubled peace process.

"One of our big partners did not want the Quartet to meet at this stage, saying maybe it's not the moment to be discussing the peace process when the whole region is undergoing dramatic changes," a European diplomat said.

Ashton was due to hold a news conference afterwards at around 1500 GMT.

The Palestinians walked out of peace talks after Israel refused in September to renew a temporary ban on building settlements in the West Bank -- on land earmarked for a future Palestinian state.

But the tumultuous events in Egypt threaten to dwarf such issues if, as many in Israel and elsewhere fear, revolts convulsing Egypt end up replacing President Hosni Mubarak's regime with a government hostile to the Jewish state.