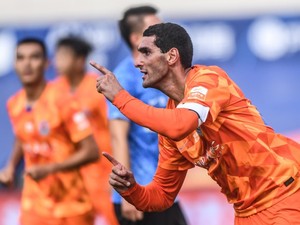 Marouane Fellaini, who spent three weeks in hospital with coronavirus, scored a hat-trick of headers in less than 10 minutes to give Shandong Luneng a 3-2 victory over Rafa Benitez's Dalian Pro on Sunday.

Former Newcastle United striker Salomon Rondon looked to have given Benitez's side a winning start to the delayed Chinese Super League (CSL) season with a stooping 57th-minute header of his own.

But former Manchester United midfielder Fellaini then roared to the fore with three towering headers in the 79th, 83rd and 86th minutes in Dalian. Two of his goals came off corners.

Spanish coach Benitez, who took Liverpool to Champions League glory in 2005, could only look on in stunned bemusement.

The 32-year-old Fellaini is the only known coronavirus case in the CSL and spent three weeks in hospital in China before his release in mid-April.

Shandong said he was asymptomatic and the giant Belgian posted pictures on social media of him doing exercises while in confinement. After his hospital stay he then spent two weeks in quarantine.

"The feeling is good, always good to score, always good to win... it was a tough, but good game," said Fellaini, who was deployed in attack in the absence of Italian striker Graziano Pelle, another former Premier League star now in China.

Benitez has now won only seven of his 18 matches in charge of Dalian since arriving a year ago from Newcastle and said that set-pieces made all the difference "because Fellaini is quite good in the air, obviously".

"We knew that, we talked about that, but sometimes you cannot stop good players.

"We didn't stop him and we made a mistake -- or a couple of mistakes -- and then with his quality he made a difference," said the 60-year-old, calling his side "nervous".

The CSL kicked off on Saturday, five months late because of coronavirus.

All matches are being played behind closed doors in two cities, Suzhou and Dalian, to limit the risk of infections.