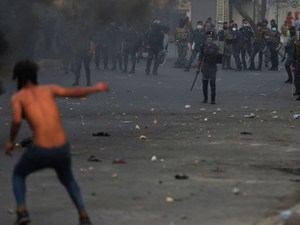 An Iraqi protester died Tuesday after being shot with a tear gas canister in overnight skirmishes with police in the capital, medical and security sources told AFP.

The clashes came just hours after Prime Minister Mustafa al-Kadhemi instructed security forces not to "fire a single bullet" at demonstrators, following the deaths of two other protesters Monday morning in Baghdad.

But by Monday evening, the confrontations in the capital's main anti-government protest camp of Tahrir Square had started anew.

"He was shot in the head and chest, and more than a dozen others were wounded. He was in intensive care and died this morning," a medic said.

The protests quickly turned violent in the capital, with two men dying on Monday morning after being hit directly by tear gas canisters that are otherwise fired in arced and less powerful trajectories to disperse protesters.

The deaths threaten to reignite an unprecedented protest movement against government graft and incompetence that erupted across Baghdad and southern Iraq in October.

Violence at those grassroots rallies had left around 550 people dead and more than 30,000 wounded, and prompted the resignation of then-premier Adel Abdel Mahdi.

Abdel Mahdi was widely criticised for failing to hold security forces to account and Kadhemi, who came to power in May, vowed to be different.

He pledged to carry out an investigation into protester deaths and promised dialogue with the movement, which had largely died down following a surge in wider geopolitical tensions and amid the coronavirus pandemic.

Following the first two deaths, Kadhemi gave a rare televised address to say he had ordered a probe into the violence and expected the results within 72 hours.

"Security forces are not permitted to fire a single bullet against our brothers, the demonstrators," Kadhemi warned.