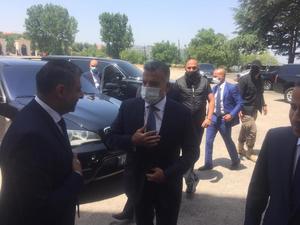 “Neutrality requires a consensual agreement among the entire Lebanese. God willing this will happen,” said Ibrahim after meeting Rahi in the patriarch's summer residence in al-Dimane.

Rahi had repeatedly called during his latest Sunday sermons to neutralize Lebanon from conflicts ongoing in the region.

On the UNIFIL’s mandate which ends on August 30, Ibrahim said: “We are demanding, just like the Prime Minister (Hassan Diab) has demanded, that the mandate of UNIFIL be extended to maintain stability on both sides of the border.”

“I am confident that our efforts will lead to fruition because there is determination to exit this tunnel,” said Ibrahim.

The security chief said his visit to Rahi is not intended to deliver a message from Hizbullah or anyone else.

Studid me! I thought having a militia backed by Iran roaming around in Lebanon would require consensus..

Hizbis are trying to get away with the Chinese model...'one country two systems'...which as we all know ends up being a load of rubbish as we see in Hong Kong. They simply apply neanderthal type force and take over.

So since General Ibrahim has become a mediator of sorts, what don't he leave his post as director of general security and appoint another Hizboz ally (most likely since Hizbos control everything) to an actual general security director.

As both un520 and levant said above, it's not going to work. I have been saying for a long time now, no donor country, no IMF, no anything to give a single penny. The current system MUST collapse to start a new. otherwise we're back to square 1.

There is only one party/militia preventing the national consensus.