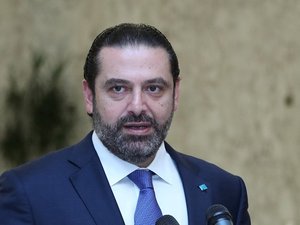 “I don’t understand where PM Hassan Diab is taking us with this diplomacy towards our friends. How can a premier make a statement against a friendly country described as Lebanon’s tender mother?” Hariri said in a chat with reporters at the Center House.

“We regret these statements,” Hariri added, criticizing Diab for saying that the French “don’t know anything.”

“They in the government don’t know anything,” the ex-PM added.

Diab had told Cabinet on Tuesday that Le Drian’s visit to Lebanon “did not carry anything new,” accusing the top French diplomat of having “a lack of information regarding the course of government’s reforms.”

“They have a majority in parliament and government. Let them work,” Hariri added on Wednesday.

He also stressed that the lengthy power cuts in the country are totally unacceptable, especially in the capital Beirut.

“They will subject the central bank to a forensic audit. Let them apply it to all state institutions,” Hariri went on to say.

Commenting on Monday’s flare-up on the Lebanese-Israeli border, the ex-PM said: “No one know what happened in the south. Is it necessary with the renewal of UNIFIL’s mandate for Hizbullah to do such an act? Who are we lying to? The army is there and UNIFIL is there. Where the government to tell us what happened?”

“The dissociation policy is nonexistent and Israel is the one who aggressed, so is it acceptable to say that we would retaliate today or tomorrow?” Hariri added.

“On top of the economic problem, we are creating another problem. If we want to go to war, the state is unaware of anything,” the ex-PM lamented.

He accordingly called for focusing on the economic collapse, warning that “without addressing this issue, no one can resist or persevere.”

Commenting on remarks voiced by Free Patriotic Movement chief Jebran Bassil, Hariri reiterated that he is not seeking to return as premier.

“I don’t want to be a premier, let no one impose conditions on me or claim that I want this or that post. I did not watch Jebran Bassil’s interview and each of us has his opinion,” Hariri said.

Well said Mr. Hariri. This idiot PM Diab doesn't know anything about his own Government. That's far for his understanding what France represents for Lebanon. He is a puppet doll of Hassan Nasrallah who is a hidden homosapien. Lebanon will never be the same as long as these culprits are sitting rooted in the parliament.

Well, if you insist on framing it as such, try replacing the picture in the frame with that of Iran's Faqueeh then hold it and look in the mirror.
Yup, that's a slave's reflection alright...

Hezb is bringing lovely Lebanon down. Why not people raise up and overthrow these filthy animals? Why must Hezb destroy that which we love? Please, please..rise up and join me in fighting Hezb and Nasrallah.

It’s a shame that your verbal poetry adds to zero, the fake west you idolise may have all the fake resources and may seem like green grass, but the reality it’s a broken society, drug and alcohol fuelled,taxes beyond most peoples reach, death from crime at a young, the elderly thrown in homes, and their inheritance stolen from their off springs and now want to impose there rules here, no thank you lebanon has a rich history , it was once the most tolerant religious place but of course it did not suit the real external stooges who them selves caused nothing but havoc and wars and been so for years . So if you ask me ! I wouldn’t be spending my 200 dollars on popcorn but rather on planting a new olive tree, in any case wishing you will sitting behind your comfy sofa and ranting

And you flock to these societies in droves...

Well my friend you chose to live where you feel more comfortable and I'll live where I have dignity and rights. That said, nobody is living in utopia and we are failing beings as humans. Your argument is very weak and bias focussing on negatives...what about all the positives??

A person who is a racist bigot and spends his day spitting out venom can never have dignity, on the contrary he him self is a negative troll .

Yes, France has been supportive of our government for ages, are you really surprised? Hezbulla is the reason no one wants to lend our government anymore. What is your Iranian counterpart going to do about it?

Yes, France has been supportive of our government for ages, are you really surprised? Hezbulla is the reason no one wants to lend our government anymore. What is your Iranian counterpart going to do about it?