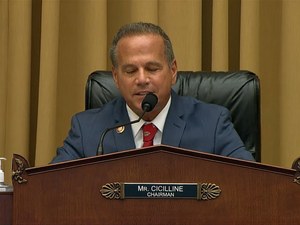 Amazon, Apple, Google and Facebook are too powerful and will likely emerge from the coronavirus pandemic even stronger, the head of a U.S. congressional antitrust committee said Wednesday.

"Simply put, they have too much power," House Judiciary Antitrust subcommittee chair David Cicilline said while opening an unprecedented hearing featuring the CEOs of the four giants.

"Whether it's through self-preferencing, predatory pricing, or requiring users to buy additional products, the dominant platforms have wielded their power in destructive, harmful ways in order to expand," the Democrat from Rhode Island said.

Congressman Jim Sensenbrenner struck a more moderate tone in opening remarks, noting that the tech giants have been central to new lifestyles as people hunker down during the pandemic but adding that with the increased power comes increased scrutiny.

"Being big is not inherently bad," Sensenbrenner said.

"Quite the opposite, in America you should be rewarded for success."

U.S. antitrust laws need to adapt to innovations that have made tech companies successful and influential, according to Sensebrenner.

"I want to leave here today with a more complete picture of how your companies use your size and power," Sensenbrenner said.

U.S. lawmakers will grill the four tech chiefs about how they wield marketplace power in what promises to be a rare political spectacle.

The House of Representatives hearing comes amid rising concerns over Big Tech dominance, which has become even more pronounced during the coronavirus pandemic.

The unprecedented joint appearance before the House Judiciary Committee features Tim Cook of Apple, Jeff Bezos of Amazon, Mark Zuckerberg of Facebook and Sundar Pichai of Google and its parent firm Alphabet.

The CEOs of four of the world's most powerful companies will testify remotely, less than 100 days before the U.S. election.

It will be the first time Bezos has testified before a congressional committee.