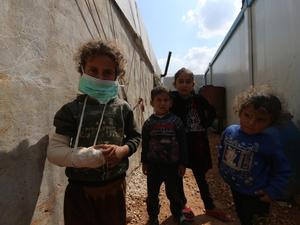 A second wave of coronavirus infections sweeping Lebanon and the Israeli-occupied West Bank is fuelling fears of a surge in overcrowded Palestinian refugee camps where social distancing is next to impossible.

At the start of the COVID-19 pandemic in March, the Palestinian Authority quickly imposed a lockdown as it sought to contain infections.

But after Israel and later the PA eased restrictions in late April and May, the number of cases rose again, exacerbated by breaches of limits on public assembly and movement.

One major driver has been Palestinian workers going to and from jobs in neighbouring Israel, according to the PA.

The Jewish state went into lockdown in mid-March, but after easing restrictions it started reporting 1,000 to 2,000 new coronavirus infections a day and re-imposed some restrictions.

The Palestinian health ministry's Tuesday update logged more than 10,860 confirmed cases of infection since the start of the pandemic, including more than 75 deaths.

That compares with an accumulated total of less than 2,700 infections and seven deaths as recently as July 1.

The growing health crisis is causing concern in the camps.

The United Nations defines about five million Palestinians as having refugee status.

They are the survivors and descendants of the more than 700,000 who were expelled or fled their land over a few months in 1948 when Israel was founded.

More than 1.5 million of them live in camps in Lebanon, Syria, Jordan, the Gaza Strip the West Bank and Israeli-annexed east Jerusalem.

They are assisted by the UN Relief and Works Agency (UNRWA), which provides them with medical aid and manages schools.

In Al-Amari camp, near Ramallah in the West Bank, an estimated 8,000 people live packed into less than one square kilometre (0.39 square mile).

"There is neither room to impose distancing nor space to carry out quarantines", said Taha Al-Bess, an official on the camp's residents' committee.

At the entrance to Al-Amari camp the road is about six metres wide but quickly narrows inside the camp, with alleys no wider than half that.

"The streets are narrow, the buildings are very close to each other, to talk about distancing is an illusion," Al-Bess said.

Throughout the West Bank, occupied by Israel in the 1967 Six Day War, around 190,000 Palestinian refugees live in 19 camps.

Few cases of sickness and no deaths have so far been recorded in Al-Amari, but the camp committee is monitoring developments in the other camps with concern.

In Jalazoun, also near Ramallah, more than 200 cases have been recorded in recent weeks and two deaths, out of 8,000 refugees.

In Al-Fawar camp near Hebron in the southern West Bank, the data is similar.

"It is impossible to implement distancing and prevent contact between the sick and other residents," said Nael Nakhleh, a member of an emergency committee set up in Jalazoun to tackle the resurgence of contamination.

A debate has arisen over who is responsible for managing the health emergency in the camps: the Palestinian Authority or UNRWA?

For Ahmed Hanoun, in charge of refugee affairs at the Palestine Liberation Organization (PLO), the answer is the UN agency.

"We are trying to work with them," he told AFP, saying he was "seriously concerned" by the virus outbreaks in the camps.

In UNRWA too, there is deep concern, particularly as the pandemic arrived at an already challenging time.

In 2018, the United States, which had been the agency's main donor, announced it was ending its annual financial aid of $300 million, arguing it was no longer relevant, 70 years after the creation of Israel.

"The situation in the camps is very worrying, especially considering the agency's financial difficulties," said Kazem Abu Khalaf, spokesperson for UNRWA in the West Bank.

UNRWA has increased calls for donations and emergency aid from its other donors.

In Al-Amari, the residents have decided to take matters into their own hands and stand at the camp's entrance to take the temperature of everyone entering.

These people need to go back and share the land they came from. It's the only dignified solution. Each side needs to eat humble pie. Enough of this bullshit. Why the hell should Lebanon be bearing their burden?