Protests against Power Outage as Lebanon Plunges into Darkness 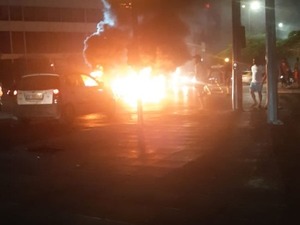 Protests against Lebanon’s aggravating economic and electricity crisis expanded on Thursday amid widespread blackouts that saw the majority of Lebanese areas drenched in darkness amid an uncommon heat wave hitting the region.

Lebanese protesters in Jounieh tried on Thursday to storm into the state-run Electricite Du Liban offices complaining against continued power cuts. They chanted slogans and threats that they won’t pay their due electricity bills.

In the northern city of Tripoli, groups gathered on the highway in al-Mina blocking it with burning tyres in protest against a soaring economic crisis and continued blackouts.

Various Lebanese regions are witnessing long hours of blackout, amid diesel and fuel shortages due to their association with the dollar and a sharp depreciation of the Lebanese pound.

Earlier in July, EDL board of directors told Energy Minister Raymond Ghajar that it might be impossible for the corporation to maintain production, transmission and distribution of electric current to subscribers.

On Tuesday, EDL said in a statement that a malfunction in the Jiyeh Thermal Factory affected the power stations in Jiyyeh-Bsalim, Zahrani and Deir Ammar.

Power outages lasting up to 22 hours per day in most Lebanese areas have crippled the country.

By a Cabinet decision, Beirut used to be excluded from strict rationing being the hub for the state’s institutions, embassies and major businesses. But not anymore.

On social media, angry comments were recorded against the government and the Ministry of Energy which did not succeed in building production plants at a low cost, and wasted about $45 billion on this sector without bringing in electricity.

Activists circulated pictures of Beirut in the dark at night.

Didn't the Minister state two or three weeks ago that everything will work fully from Thursday.
Oops sorry, he didn't say which Thursday in which year.

Don't worry everyone our beloved nassi and his hizbis have rockets, they'll make electricity and save Lebanon.

I think you’ll fine israel has already started the generator

Nothin will bring electricity to Lebanon 24/7, unless EDL is privatized. As long as it's in government's hands, the inefficiency, corruption, will continue and no electricity. Same withTelecom. Te State should basically have no control over any industry. Sell them and open the market to others so people have completion of service which in tuen will bring prices down. No other way around this.

Quite funny to see Lebanese citizens giving lectures on social media and other platforms on how to manage Public sector efficiently... Everyone in Lebanon seems to be an Expert in Public sector but nobody can explain why you guys can't use same expertise to innovate industries in Private sector in order to improve the country's economy by making it less dependent on Foreign nations! Spending time criticizing Politicians online will take you nowhere.

EDL needs to be privatized and the management, which has been there since the syrian occupation, needs to be FIRED, and probably thrown in jail. And just as importantly, ImBasil, Barry, Harirri, Jumblatt and company should have NOTHING to do with it. They take for themselves, give jobs to their minions and then blame everyone else for any problems.

I fully agree with you