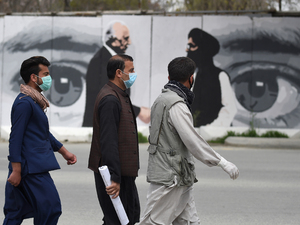 The coronavirus is pushing millions more Afghans into poverty, overwhelming Afghanistan's basic health care system and exacerbating food insecurity in one of the world's poorest countries, a US watchdog said Friday.

The virus entered Afghanistan in February as thousands of migrants returned from neighbouring Iran, which at the time was the region's worst-hit nation for the virus.

Since then Afghanistan, already wracked by decades of war, has been ravaged by COVID-19.

In its quarterly report, the office of the Special Inspector General for Afghanistan Reconstruction (SIGAR) warned that the country "is headed for a humanitarian disaster".

"The economic shock of the pandemic -— including increased unemployment, food-supply disruptions due to border closures, and rising food prices -- has exacerbated Afghans' food insecurity, already impacted by the ongoing conflict and high poverty levels," said SIGAR, which collates expert and media reports and conducts its own analysis.

The report warned that about one-third of Afghanistan's estimated 32.2 million people were either in a crisis or an emergency state of food insecurity.

Prices of essential commodities like wheat flour, cooking oil, sugar and pulses have steadily risen over the past few months.

"At the same time, the purchasing power of casual labour has dropped significantly," the report noted.

SIGAR said Afghanistan had likely entered a recession because of the pandemic, with the economy projected to shrink by up to 10 percent in 2020.

"Experts predict that an additional eight million people will fall into poverty, pushing the poverty rate from 55 percent to 80 percent," the report states.

SIGAR said that number may "vastly undercount" the true toll of the virus and pointed to research showing up to 90 percent of possible cases are not being tested.

Most of the cases are in urban areas, with the capital Kabul becoming the epicentre of the virus.