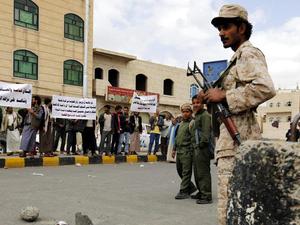 Yemen's Huthi rebels on Thursday freed six members of the Baha'i faith whose years of imprisonment had raised international concern, the community said.

Hamed bin Haydara, who had been detained since 2013 and sentenced to death, and five others were released in the rebel-held capital Sanaa.

The Huthis' political wing had announced in late March that it would free all Baha'i prisoners but had not immediately followed through.

The community thanked Martin Griffiths, the UN special envoy for Yemen and the office of the UN High Commissioner for Human Rights for securing the release of the six Baha'is.

But it said that the six were still seeking the return of seized assets and properties and the end of all charges against them.

"As Yemen's search for durable, societal peace continues, Baha'is must be able -- like all Yemenis -- to practice their faith safely and freely, in keeping with the universal principles of freedom of religion or belief," said Diane Ala'i, representative of the Baha’i International Community at the United Nations in Geneva.

"This is not possible until the charges are lifted," she said.

The Huthis seized Sanaa in 2014 and control much of Yemen, despite a US-backed military campaign led by Saudi Arabia, which has been widely criticized for attacks that have killed civilians.

The rebels are linked to Iran, whose Shiite clerical regime bans the Baha'i faith, even while granting religious freedom to other minorities, including Christians and Jews.

The faith was founded in the 19th century by an Iranian, Baha'u'llah, and calls for unity among religions as well as equality between men and women.

Believers consider Baha'u'llah a prophet, putting them at odds with the orthodox Islamic view that Mohammed was God's final messenger.