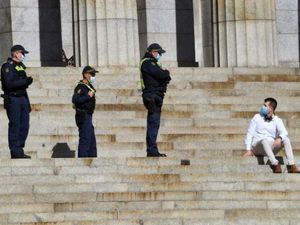 Australian officials were eyeing tighter restrictions in the nation's second-biggest city Friday as hundreds more coronavirus cases were recorded despite more than three weeks in lockdown.

As greater Melbourne passed the halfway point of a lockdown initially intended to last six weeks, Premier Daniel Andrews said the state would be stuck in "limbo" unless it could cut the infection rate.

"We've stopped it from getting completely out of control... but we haven't been able to suppress it sufficiently," Andrews told media in Melbourne.

Without a drop in infections, there was an "absolute certainty" any rollback of restrictions would see virus cases spiral out of control, he said.

"It's almost impossible for us to see businesses recover and survive unless and until we get these numbers down."

Victoria state -- of which Melbourne is the capital -- reported over 600 cases Friday and eight deaths, a drop after recording the nation's highest daily toll Thursday with 18 deaths and 723 cases.

Half of the new deaths were connected to aged care homes in the city.

The state's top health official said any increase in restrictions had "really significant consequences" but admitted tougher rules were now being considered, including a strict lockdown and widespread business closures successfully used in neighbouring New Zealand.

New Zealand has not recorded a locally transmitted case from an unknown source in over 90 days and only 22 deaths in a population of five million.

Australia's cases ticked toward 17,000 on Friday, recording 196 deaths in a population of 25 million.

The outbreak comes as Muslims around the country mark Eid Al-Adha -- with Andrews admitting the religious holiday would look incredibly different this year for Victorian worshippers.

In Sydney, restrictions on numbers allowed inside the Gallipoli mosque caused large queues on Friday morning, with all worshippers wearing masks as the city battles growing clusters.

Elsewhere in the country other states and territories have reported zero or just handfuls of cases for weeks, relaxing restrictions but banning visitors from the hotspots of Victoria and greater Sydney.